Radioactivity is a natural part of our environment and our lives, and has wide uses in science, medicine, industry, and energy production. Radioactivity detection is a key factor in the safe handling of this type of material, both in the laboratory and real conditions. Fast and accurate localization of a radioactivity source from the air is the main criterion for success in dealing with potential crisis situations. Yes, we are talking about the use of drones within the RaDron project.

The RaDron project, in which experts from ADVACAM, the Faculty of Electrical Engineering of Czech Technical University (FEE CTU), and the Czech Metrology Institute (CMI) participate, has completed the first phase of testing a prototype drone to search for sources of radioactivity. This phase was very successful; during the test flights, the developed technology was tested for localization of a source of radioactivity in real conditions. The RaDron team is aimed at fully autonomous system; based on information from a radiation detector of the so-called Compton camera and subsequent software processing of the signal, it automatically navigates the drone to the radiation source. Therefore, it is neither dependent on a GPS signal, nor a drone operator. RaDron can operate both inside buildings and in difficult terrain (e.g., in a forest), thanks to one of the miniaturized versions of the drone and its unique control system. Moreover, the Compton camera alone weighs only 50g.

The drone test took place both outdoors and indoors; the Cs-137 radioactivity standard with an activity of 58.2 MBq was used as the radiation source. The drone was equipped with the first version of control, data acquisition and processing software for Compton camera. The control system recorded drone flight data (position, orientation, map of the environment, etc.). During the experiments performed in 2020, the idea of localization of the radiation source using Compton camera was verified. The position of the source was calculated from the data provided by the camera and was visualized in the drone’s 3D map. Besides, the connection of the detector and its stability during take-off and landing (sensitivity to shocks and vibrations) were tested. Everything worked beyond all expectations – there were no outages in communication and data collection during continuous detector operation. 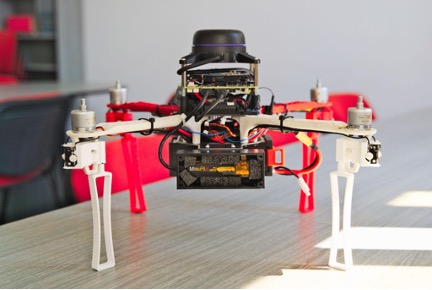 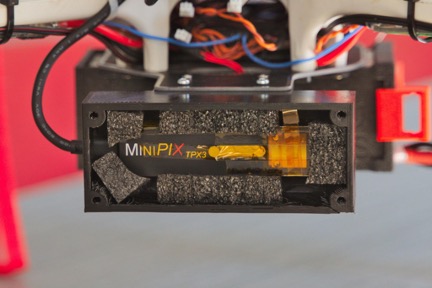 “Using the Compton camera on a drone is not the only option when searching for sources of radioactivity,” says RaDron project creator and ADVACAM scientific director Dr. Jan Jakůbek; he continues: “Stationary cameras find their use in medical facilities and laboratories; the mobile phone application will help rescuers and firefighters.”

This year, the RaDron project flight schedule is already full. Autonomous searching for a radiation source will be tested in several situations. One of the test scenarios and summits of the project is checking the drone's ability to monitor a moving source of radiation as part of a radioactive material theft simulation, e.g., by a criminal or terrorist group.